At the evening of a cold winter night in Feb 2016, the radiator in the old studio apartment I rent refused to be functioning properly, again. It was the Chinese New Year when Chinese people tend to gather around with their families and celebrate. Even in the worst condition they would lay down works, have a decent supper and rest for at least one day. However, I was busy stemming gaps in the window with a bag of medical cotton balls. The scenario made me feel upset, but what I cannot foresee is a sudden power-off that will happen in 10 minutes will make me more upset.

So my mental tolerance reached its very limitation after another 600 seconds. I packed a bag, grabbed some drawing tools (I always have them on me), and rushed outside.

I was sitting in Mcdonald’s, drinking coffee. But as long as those problems exist, and waiting for me to fix them one by one, the fact would be a real torture to think about. I took out my phone, checking maps to see where I can run to. To Margate? Somehow it failed to interest me. To North? If I would like a colder place, I can just stay at home till midnight.

“Cornwall. Why not Cornwall? I have known Mountain Saint Michael since I was little and always wanted to see it. Right now is a rare moment that I do not want to be home, and the train station is quite nearby. ”

A ticket has been bought, and a journey begins.

As the train gradually moved westward, inspirations have come to me. I wrote down these on the back of that year’s final project sheet:

Like brightness and darkness, land and sea is opposite. Shore is where they mingle. Shore is where Ivory-white cliffs slowly formed by gentle weathering, shore is where waves splashing themselves over beaches. A piece of shore could be an epitome of a length off coastline. For a nation that established upon 19,000 miles of coastline, Britain is tightly connected to the sea. Ocean currents have brought infinite amount of fish to its fishers. Strong Northern sea wind has tested the will of surviving of British people through thousands of years. Oceanic water cycle makes air humid enough to from rain clouds so that farmers on this land can water their boundless wheat fields and hop plantations. Thousands of invasions marched inside Britain through its coastline, somehow her people can always find a way to defeat their enemies. Since the arrow flied in the sky of Hastings, to bombs fell down with horrible screaming upon London, coastline has not be the start point of invasion every time, but it is always where foe retreats. it is always where a peaceful new era begun. When the first expedition sail that Britain sent appeared on British horizon after its returning, coastline has become the symbol of treasure and the hope of survive. British came through its coastline and conquered half of the world. Uncountable sails linked together from near to the distant like snowfields. The romance of voyage did not die with the end of the Great Sailing Age. It is a new time of coastal culture. The ocean-related culture is what attracted me to spend years in Britain. Now it is the time for me to feel the beauty of the coastline, through the east, to the west.

In this book, I attempted to demonstrate my feeling of the connection between coastline and British culture. I attempted to demonstrate every aspected that British coastline has. Form the golden reflection of summer’s sunshine that sweet enough to melt every lovers that walking along beaches, to a burning sky that plating hermosa pink to everything. From the stormy rain that freaks out seagulls and inks the sky, to the sea breeze that transform grassland into waves. I am not a British, and I aware of that I do not belong to the United Kingdom just as those unfriendly local believes, but I can still love British Coastline, and all of its romance.

I thought the project will end with the semester. Therefore I did not expect this trip will significantly motivate me to keep producing works about English landscapes afterwards. After falling in love with those breathe-taking views, I was just hunger for acquiring more elegant painting techniques to reproduce scenes with stronger emotion. 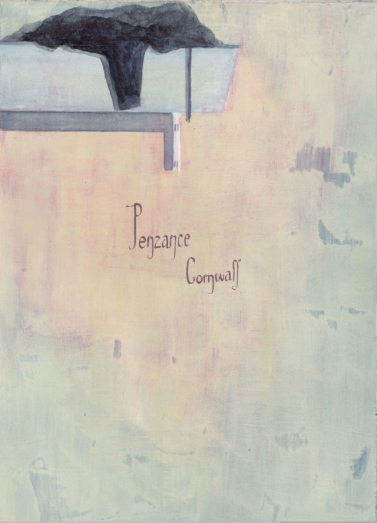 These are works I produced during a three-day trip to Penzance and St. Ives. Sadly I was not lucky enough to visit Mt. St. Michael. I did in 2017 though, but by then free time to produce that I would like to create has become really rare. 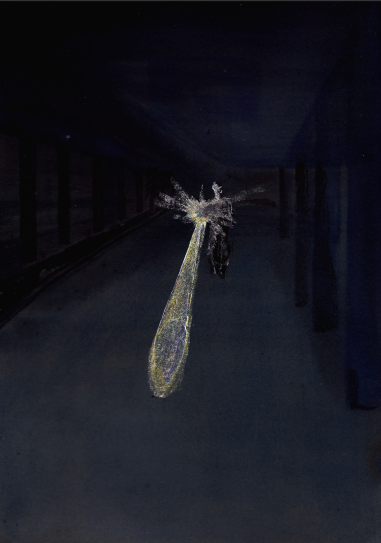 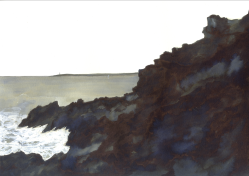 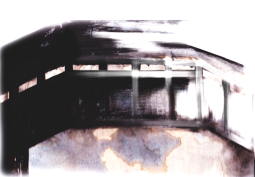